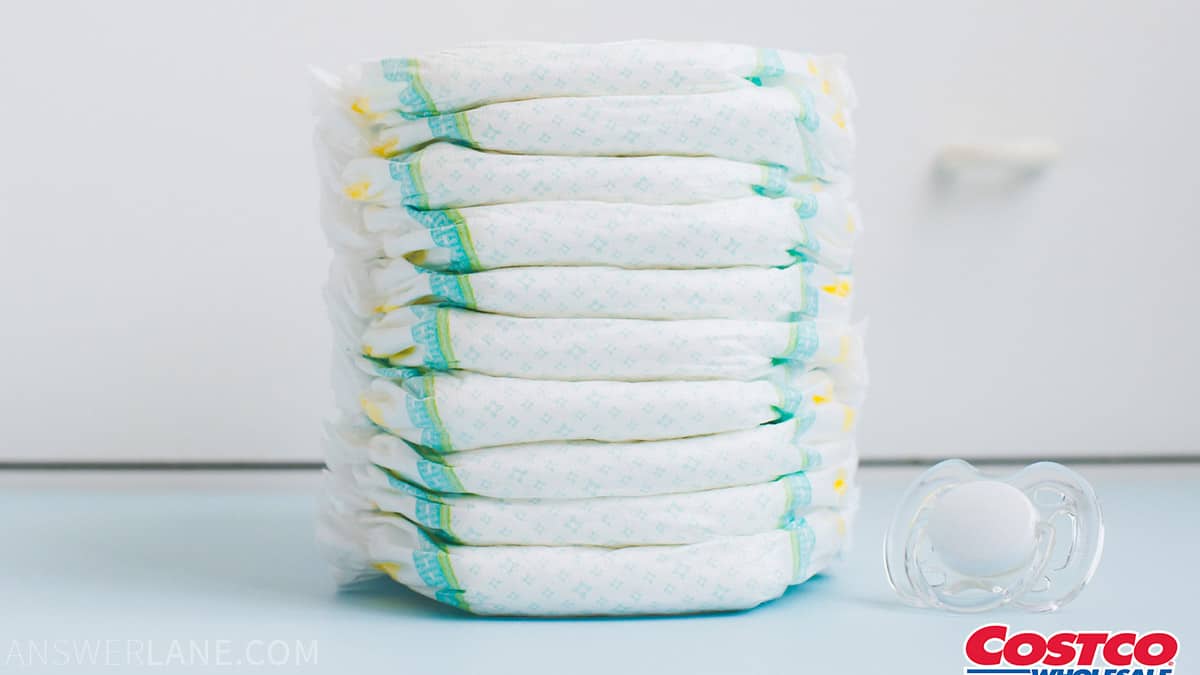 Caring for a newborn is a great experience. You and your partner get to discover the joys of parenting together, staying up to comfort your child, feeding them, and changing their diapers.

And with all these new experiences also comes a fair amount of expenses. For most middle-class American families, their child accounts for over 14% of their expenses, most of which goes to food, diapers, and other baby necessities.

But as we all know, babies are sensitive and they also grow fast. So, there’s a large chance that the pack of diapers you bought at Costco won’t be the best choice for your child, or in some cases, they may be the wrong size for your child sooner rather than later.

So, if this happens can you return diapers to Costco?

In this article, we’ll answer just that. We go through the Costco diaper exchange policy, how to return diapers at Costco, and even the types of diapers available at Costco warehouses.

Can You Return Diapers To Costco?

As of 2022, customers can return diapers to Costco. You can currently return diapers by going to a Costco warehouse to process the return or requesting a return online and returning the diapers through USPS or UPS.

You may return unopened diapers and opened diapers that haven’t been used, as long as Costco can confirm your purchase. To do this, you either need to provide the original receipt or your Costco membership number.

If you’re trying to return a Costco item without a receipt, then the membership number will help Costco track the order and verify the purchase.

Costco is known for having a fairly lenient return policy, which is one of the reasons many people sign up for Costco memberships. On their website, it states that they guarantee customer satisfaction with every product, and they can return them at any time if they are displeased by it.

Just like any other return policy, there are some items at Costco that fall under different terms. However, diapers fall under the same return policy as most other items at Costco, so if the diapers don’t fit your child or they are the wrong kind for your baby, you can return them to Costco at any time and receive a full refund or get an exchange.

How To Return Diapers To Costco

As mentioned earlier, customers may return diapers to Costco either by going to a warehouse or through the mail. For faster returns, it’s recommended to return the diapers straight to a Costco warehouse, as customers report smoother experiences through this method.

Regardless of the diaper brand you bought, you can head to any Costco warehouse and proceed to the customer service desk to start your return. From there, a Costco associate will have to confirm your purchase before processing the return.

To make it easier to confirm the purchase, we recommend bringing the original receipt or your Costco membership card. And once Costco accepts the return, you may receive a full refund.

If you opt for a replacement and the size needed isn’t available, you may have to settle for a refund and purchase the diapers online or wait until the next Costco restock.

Can You Return An Opened Pack Of Diapers To Costco?

Yes, since Costco has a fairly lenient return policy, customers may return a pack of diapers even if it has been opened and one or two diapers are missing.

Most Costco warehouses will accept the return even if a couple of diapers are missing, however, you have to make sure the majority of them are still inside the pack. This basically proves to Costco that you aren’t taking advantage of the lenient Costco return policy.

Additionally, it may depend on Costco whether or not they will accept the opened diapers. If too many are missing or the pack isn’t in good condition anymore, they may reject the return, though this doesn’t happen often.

On top of that, you may have to provide a reason for the missing diapers before Costco can accept the return. With that said, saying the diapers didn’t fit your baby or that your child’s skin didn’t react well to the diaper is a good reason and Costco will likely accept your return if you state these reasons.

What Kind Of Diapers Can You Buy At Costco?

Costco is known for stocking a variety of different brands and products for its customers. So, if you go to a Costco warehouse looking for diapers, you can expect to find a large variety. On top of that, you may also be able to save significant amounts of money if you buy the diapers in bulk, which is part of Costco’s signature business model.

You can find most of the common diaper brands at Costco such as Huggies, Pampers, GoodNites, Playtex Baby, and RICO. On top of that, you can also find the Costco brand, Kirkland Signature, which is known for providing quality products at a competitive price.

All brands of diapers at Costco, whether you bought them online from the Costco website or at the warehouse fall under the same diaper return policy. So, if your baby doesn’t react well to the diapers or they don’t fit, you can always return them to the warehouse and receive a full refund or replacement.

Can I Return Diapers To Costco Without The Receipt?

Yes, you may be able to return diapers at Costco without a receipt.

With that said, there are a couple of factors at play when returning an item without a receipt to Costco. This includes the state of the product, whether or not most of the diapers are still in the pack, and whether Costco can confirm your purchase.

When returning diapers without the receipt to Costco, it’s best to bring the original debit or credit card used to pay along with your membership card. Additionally, if the pack of diapers is opened and there are a couple of them missing, you have to explain why there are some items missing from the pack.

Then, depending on the reason and the number of diapers left in the pack, Costco will accept or deny your return.

When returning an item to Costco, you may choose to receive a full refund or an exchange, regardless of whether you brought the receipt. For full refunds, make sure to bring the card that you used to pay for the diapers as Costco will refund the money back into the same account.

Diapers at Costco fall under the same lenient return policy as a lot of the other items that Costco sells. So, if the pack of diapers you bought for your baby at Costco doesn’t fit quite right, don’t worry as you can always return them to Costco provided the item meets Costco’s return policy.