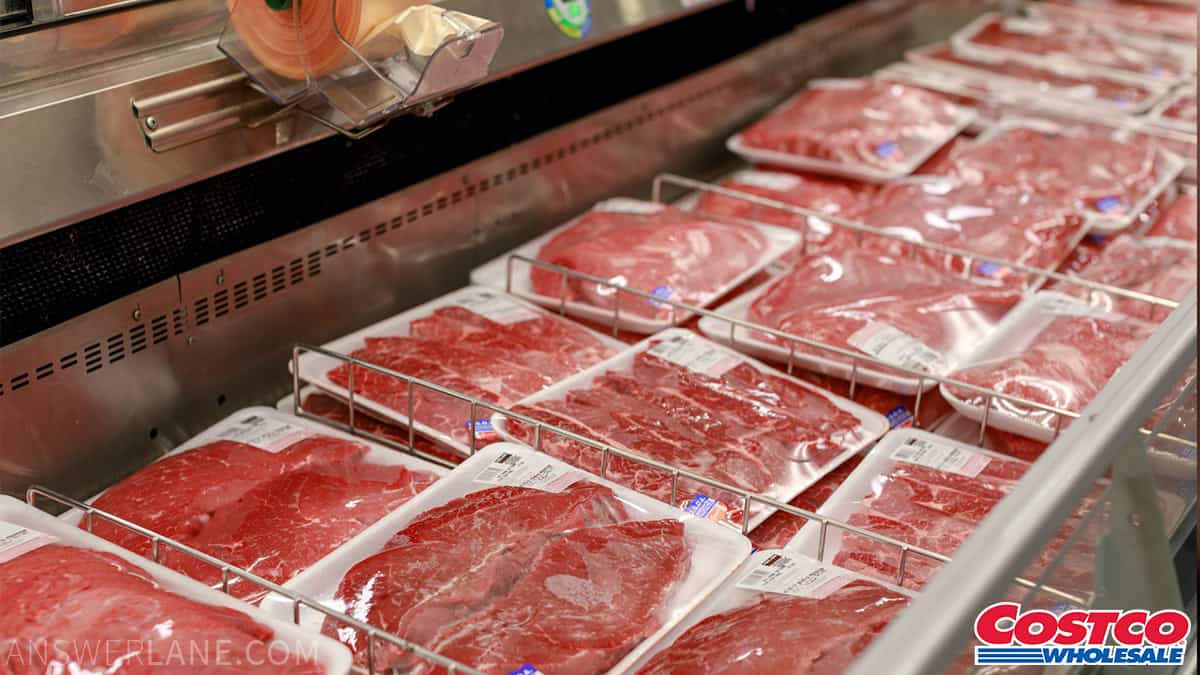 As one of the largest retailers in the United States, Costco is renowned for their vast majority of products they sell. From clothing to furniture and groceries, Costco truly sells a lot of everything.

But besides selling a vast range of products in their over 800 warehouses worldwide, Costco have also made a 100% customer satisfaction guarantee, which they make sure to meet by providing high-quality products at all times regardless of whether it’s about a new set of furniture or raw meat like chicken, beef, and pork.

When it comes to food at Costco, customer’s can be quite skeptical, which is why they often ask where Costco meat comes from.

And since this is a very popular question, we went out there and conducted extensive research and have the answers to all of the questions you may have regarding the origin of Costco’s meat.

Where Does Costco Meat Come From In 2022?

From 1961 to today, the consumption of meat has increased by 40% across the United States and is showing no signs of slowing down. With this ever-growing demand for meat, Costco relies on various farms and supplies, which are mostly located in the United States.

In rare cases, Costco also gets meat from Australia and Norway – but this is mostly lamb and fish whereas pork, chicken, and veal come from American farmers and suppliers.

To find out where Costco gets each type of meat from, keep reading.

Where Does Costco Beef Come From?

Beef is one of the most popular meats amongst American consumers, and because of the ever-increasing demand for beef, Costco sources their beef from many suppliers to meet the demand.

However, the majority of their beef is sourced from California farmers that are located in the San Joaquin valley.

Following the United States Department of Agriculture’s most recent meat regulations, Costco ensures that all their beef suppliers are 100% certified. Meaning that before slaughter, the Costco beef is systematically tested for harmful pathogens and bacteria, ensuring it is 100% safe for their customers before it reaches any of the Costco warehouses throughout the country.

In addition to their routine checks, Costco requires audits from animal welfare prior to slaughter according to the American Meat Institute Recommended Animal Handling Guidelines.

When it comes to Costco’s organic beef, it is also sourced from California farmers, but some of their stock does come from foreign suppliers. Following U.S meat regulations under the National Organic Program, Costco’s organic beef stock is not fed with any type of hormones or antibiotics.

For any organic meat that comes from outside of the United States is mainly sourced from countries like Canada and Australia. Even then, Costco still makes sure that all the health and safety processes are met before loading the organic beef onto their shelves.

As an example, Costco’s Canadian beef stocks are located in Alberta, and are 100% grass-fed. In other words, the quality of beef at Costco vs Walmart and any other competitor is very similar if not better.

Where Does Costco Lamb Come From?

Costco prides itself on supplying their customers with great quality meat, and that is certainly also the case when it comes to Lamb. The lamb at Costco is supplied by farms in Australia.

The animals there are grass-fed and pasture-raised. The farmers also don’t use any additional additives or hormone growth antibiotics, which in turn results in great and high-quality meat.

This is why the lamb at Costco in particular is known for its quality and tenderness.

Where Does Costco Veal Come From?

The veal sold at Costco is traceable all the way down to the farm that it comes from. To ensure quality, Costco regularly conducts welfare audits and inspections in order to ensure that their standards are met.

Besides that, Costco also has a very strict veal policy, which takes into account barn requirements, veterinary visit cycles, housing, diets, and more.

Where Does Costco Chicken Come From?

A lot of people wonder where Costco chicken comes from. Costco has their own chicken farm and processing facility that is located in Fremont, Nebraska.

Thus, all of their chicken products that you can buy from the Costco website and in-store are sourced from their own chicken farm. Their farm has been the only supplier of chicken for Costco since 2019, keeping animal welfare at the forefront of importance.

This was done after Costco cut ties with partners who have failed to provide the quality of chicken Costco demanded for their customers. Besides, Costco also knew that they could provide better animal welfare, and as a result, building a chicken facility was the right next step.

Where Does Costco Fish Come From?

The large majority of fish produce comes from abroad. This is because Costco supplies various types of fish, and in order to get the best quality possible, they must find the best suppliers in the areas where the particular type of fish originates from.

But, how do Costco keep their fish as fresh as possible when the fish is sourced from across the world?

Costco has a very refined process of delivering fish to their warehouses even from across the world. This ensures that from the moment the fish is caught to the moment it is displayed in the warehouse, the product is of prime quality.

If you order from the Costco website and get free shipping, you can rest assured that the quality of produce will be just as good as if you were to buy it in-store.

To ensure the preservation of the wildlife, Costco keeps close attention on wild species that have been identified to be at great risk. If that is the case, Costco will stop supplying until further notice.

Where Does Costco Pork Come From?

Costco’s pork produce for their privately-owned brand called Kirkland Signature is mainly sourced from JBS Swift USA. They are based in Indiana and are the second-largest pig farming and processing facility in the United States.

From there, Costco gets their primal cuts, bacon, and ham alongside other pork products.

When it comes to quality control, Costo is very strict about it. They have implemented a PQAP (Pork Quality Assurance Program), which is a producer-driven program, which ensures that all farmed pork produce is of the highest quality possible, is safe for consumption, and that all the animals involved are well cared for.

Does Any Costco Meat Come From China?

No, Costco doesn’t source any of their meat from China. The reason for that remains unclear but we know that because Costco are very transparent as to where their livestock comes from.

If that was a concern of yours, you have nothing to worry about. Whether the meat comes from a U.S, farm or from across the ocean, Costco requires every single one of their suppliers to meet a certain level of standard or else, they wouldn’t work with them.

And that’s good for you and me – the consumers – as everything we see on the shelves at Costco is fresh and of the best quality possible.

Conclusion – Where Does Costco Get Their Meat From In 2022?

As of 2022, the meat at Costco comes from all over the world. Though it mostly comes from within the United States, it’s not rare to see fish coming from Norway and lamb coming in from Australia.

Whatever the case may be, Costco always makes sure that their suppliers meet Costco’s requirements before sourcing produce from them. This way, the customer will get high-quality meat at all times.

Costco Battery Core Charge [How Much, How It Works & More]